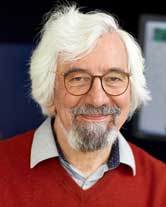 Maximilian Haider, an Austrian living since 50 years in Germany studied physics in Kiel and Darmstadt where he got in touch with Electron Optics by O. Scherzer and H. Rose. For his Diploma work he developed a multipole-element for the running Cs-Cc aberration correction project in Darmstadt and with finishing the development of a new electron spectrometer he received a PhD in Physics in 1987. He then worked first as staff scientist and 3 years later as group leader in the Instrumentation Program of the European Molecular Biology Laboratory in Heidelberg. Although working in a biological environment he could convince the laboratory to accept a project, funded by the VW-Foundation, to develop a Cs-corrected TEM for high resolution EM in cooperation with the theoretician H. Rose and for the planned later applications with K.Urban. In 1996 he founded together with J.Zach the CEOS GmbH company in Heidelberg for which he acted as managing director together with J.Zach till 2015. Since then he became a senior advisor of CEOS. In 2008 he was appointed as Honorary Professor at the Karlsruhe Institute of Technology. He received several highly repudiated awards together with H.Rose and K. Urban like the Wolf-Prize and recently the Kavli-Prize as a four people group together with O. Krivanek.