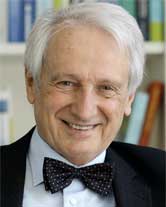 Knut W. Urban studied physics at the University of Stuttgart where he received his doctor degree in 1972. He then joined Max Planck Institute for Metals Research, where he was appointed head of the high-voltage electron microscopy group. He spent extended research stays at CEN Saclay/Paris, at BARC Mumbai, and at Tohoku University, Sendai. In 1984 he was appointed Professor for Materials Science at University of Erlangen, and in 1987 he became Chair of Experimental Physics at RWTH Aachen University and Director of Institute for Solid State Research, Research Center Juelich. In 2004 he was co-founder of Ernst Ruska Center for Microscopy and Spectroscopy with Electrons. Since 2009 he is Distinguished Professor at Juelich-Aachen Research Alliance (JARA). He worked in many fields of experimental physics, including atomic defects in metals and alloys, plasticity of quasicrystals, oxide superconductor thin films and devices, and structural properties of oxide materials. Urban received a number of national and international awards. Among these are the MRS von Hippel Award, and as a member of the team developing the world’s first aberration-corrected transmission electron microscope he received (together with M. Haider and H. Rose) among others the HONDA Prize for Ecotechnology, the BBVA Award in Basic Sciences, the WOLF Prize in Physics, and the KAVLI Prize in Nanoscience. Urban was President of the German Physical Society. He has an honorary doctor degree of Tel Aviv University, and he is honorary member of national and international societies including the MRS and the Japanese Institute of Metals and Materials.